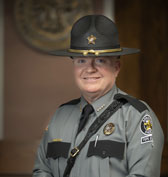 You may now put money on an inmate's books online.  Just log on to WWW.CSGPAY.COM   Follow the prompts to create an account and add money.  If you need the individual's Inmate I.D. number, simply click on the inmate roster tab for that information.

In 1999, Captain Rowdy Sweet began his career as a corrections officer, after serving seven years in the United States Navy.  In 2001, he was selected as a patrol deputy and served in that capacity until 2005 when he was assigned to the criminal investigation division.  From 2008 until 2014, Captain Sweet was chief investigator in CID.  In January, 2015, Captain Sweet was appointed as Pope County Detention Center Jail Administrator.

Lieutenant Aaron Swatzel began his career as a corrections officer at PCDC in November 2010. In March of 2013 Lt. Swatzel was selected as a support supervisor on his shift where he assisted the shift sergeant. In April of 2014 he was promoted to shift sergeant and served in that capacity until October of 2018 when he was promoted to Assistant Jail Administrator for the Pope County Detention Center.

Sgt. Danielle Holmes began in April, 2014 as a correction's officer and was promoted to booking officer, classifications officer and now administrative sgt. where Mrs. Holmes is responsible for receipting and depositing money for inmate accounts. She also verifies booking records, submits affidavits for bills as well as assists correction officers in their day to day duties. Mrs. Holmes may be reached at 479-968-2558 ext. 1035.